How to Teach Classroom Procedures – Part 1 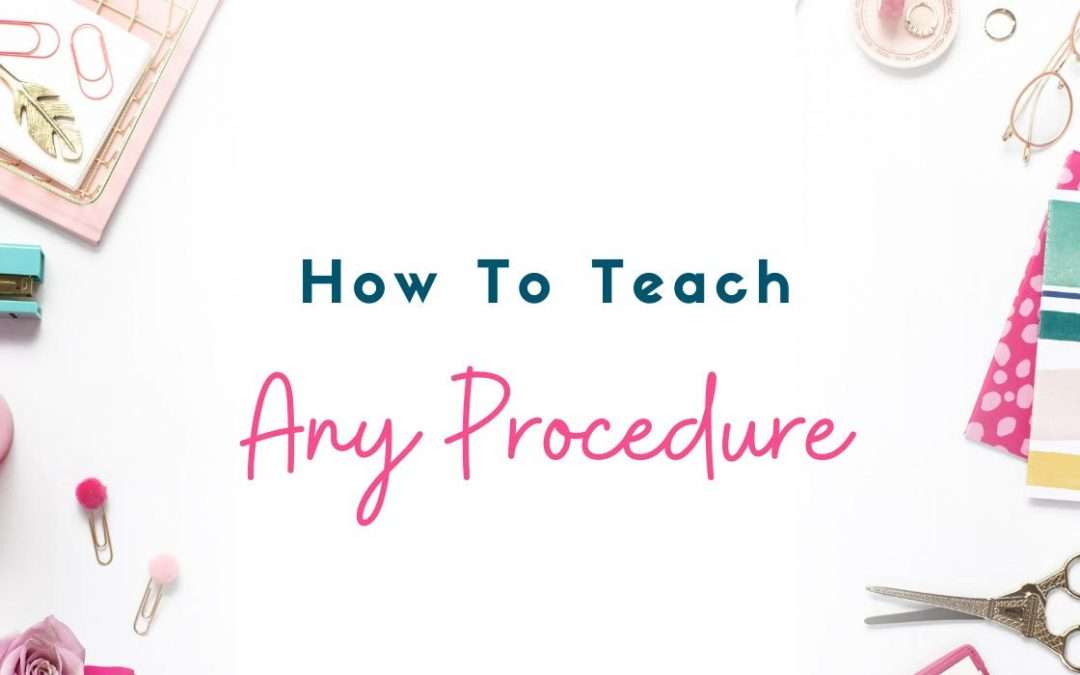 Today’s blog post is going to focus on one of the most important things we have to do once the kids arrive for the start of the school year – teaching procedures.  This is crucial at the beginning of the year to set the tone of the classroom, but it is also important to revisit many times throughout the school year. Having a specific method to follow will help you be consistent no matter where or when you teach or review your procedures.

Also, this is a topic that’s not just reserved for teachers. If you or your friends are parents, this idea would work at home too. So feel free to share this blog with anybody you know that has children at home that may benefit from this as well.

I’ve got a step by step process for you that would work with pretty much anything that you may need to teach. And I’ll give you an example along the way as well.

How to Teach Classroom Procedures

Define what procedures need to be taught

The very first thing that you need to do well before the students arrive is to define what procedures need to be taught both for you and for the students. You need to think about what things kids are going to be doing on a routine basis. For example, in the classroom, that might be things like arrival procedures, dismissal procedures, lining up, or turning in work. All of those are things that kids are going to do on a regular basis and something that most teachers have a certain way that they want it done in their classrooms. If you’re at home, you may have a bedtime routine or a homework routine. So any of those ideas would apply for this particular topic.

Brainstorm the steps of the procedure

Next, brainstorm the specific steps you want children to follow for the procedure you have in mind first. You want to make sure that you know exactly what it is you want the students to be able to do. You also have to think about how you want to explain that to the students. This probably goes without saying, but explaining a procedure to a six year old kindergarten student is very different than explaining even the same procedure to a fifteen year old sophomore in high school.  It sounds crazy, but just because you know what you want them to do, doesn’t mean that you necessarily have the language for teaching them. So you want to think about your age group–your target audience, so to speak–and how you can best explain that procedure to them.

Step three is to break that procedure down into as many steps as you possibly can, not to make it a bunch of steps, but to make sure that you don’t forget anything. For example, let’s talk about lining up.  That’s something that probably every elementary classroom in the world does at some point. And it’s actually one of my favorite procedures to teach. I had to stop and think, what is it that I need them to do? Well, I had to think about how I wanted them to transition from whatever it was we were doing to where it was they were going. I had to think about these things:

Then, I had to think about how I wanted them to line up…

I mean, I don’t know any classroom in the world that would let kids just run up to the line. But again, those are the kinds of things that you want to think through in this third step. As teachers, we realize that running would not be a plausible idea, but kids need to be specifically told that. Be sure you think of everything that you would want them to know, and then how you’re going to teach it.

Be sure to optin to receive an email when the next post arrives:

This website uses cookies to improve your experience while you navigate through the website. Out of these, the cookies that are categorized as necessary are stored on your browser as they are essential for the working of basic functionalities of the website. We also use third-party cookies that help us analyze and understand how you use this website. These cookies will be stored in your browser only with your consent. You also have the option to opt-out of these cookies. But opting out of some of these cookies may affect your browsing experience.
Necessary Always Enabled
Necessary cookies are absolutely essential for the website to function properly. This category only includes cookies that ensures basic functionalities and security features of the website. These cookies do not store any personal information.
Non-necessary
Any cookies that may not be particularly necessary for the website to function and is used specifically to collect user personal data via analytics, ads, other embedded contents are termed as non-necessary cookies. It is mandatory to procure user consent prior to running these cookies on your website.
SAVE & ACCEPT