Two Small Changes That Made All the Difference in My Classroom 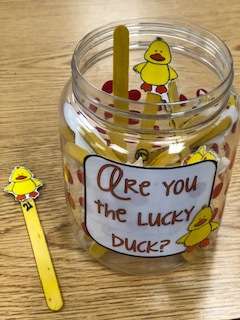 Want to know the best way I have found to curb excess talking? How about the most equitable and easy way I found to handle classroom jobs? These two seemingly small changes made a huge impact in my classroom!

Let’s talk about ways to curb the chatting first, shall we? 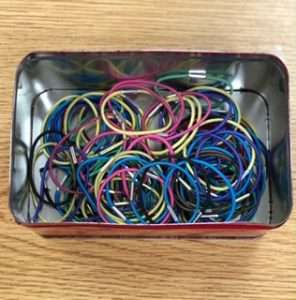 Every morning, each student got 3 bands. I used the hair ties that came in packs of 100 for $1 at Dollar Tree and just kept them in a tin I had from a gift I had received years ago!

I bought 5-6 packs at the beginning of the year and that usually lasted us the entire year—you could even think about putting them on your supply list or wish list for your classroom.  Invariably, I would have some break, or accidentally go home with a child. They also just wore out after a while—at 100 for $1, they aren’t necessarily the highest quality item you will find!

Here’s how the idea works:

The students could wear them on their wrist, keep them on their nametags, supply boxes, or whatever you choose. Each time they blurt out, they put one back in the container we keep them in.

I even developed a nonverbal cue to let them know that they had lost a band, so that I didn’t have to disrupt my teaching.  I would make eye contact with them and just tap my wrist and then point to the tin where the bands were kept.

This way I could keep going with what I was doing, and they simply got up and put the band back in the tin.  They knew right where it was kept (for me it was right on top of our mailboxes, so it was easily accessible, and they saw it often) and they could do that without any further disruption.

In over 20 years of teaching, I had tried several things, but this was by far the one that worked the best for me. It’s great because it’s a visual reminder for the kids, and this way you can be sure you have given them 3 warnings first before giving a more serious consequence. Win/win in my book!!!

The other so-simple-I-can’t-believe-I-didn’t-think-of-it-sooner hack is how I handled classroom jobs. 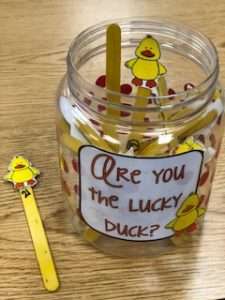 It was another classroom “chore” that I tried multiple ways of managing before I finally settled on a great, easy solution.  When I was first teaching I had only a few jobs, but kids felt left out because only a few students ever got to help.

Then I purchased a pre-made bulletin board kit, but their jobs didn’t meet my needs.  Then I came up with a list of jobs so that every child had a job that I was changing every week.  Except that I would often forget.

I had students complain that some jobs were almost never used, while others were used multiple times a day.  There was even a year where I thought I would tie persuasive writing to the class jobs, so that kids could convince me that they were the right person for the job.

All in all, no matter what approach I took, it was just a headache that I never looked forward to dealing with until I came up with the idea that I will share with you here.

Some of you may already be familiar with Tara West and her blog Little Minds at Work.

She has tons of great ideas for primary grades.  She did a blog post with a printable for a “Lucky Duck.”  She used it to choose a mystery student for staying on task.

However, one day when I was particularly frustrated with jobs and kids complaining about them, I decided to make my “Lucky Duck” the helper for the day.  So each day, during our morning meeting, I pulled one stick and that person was the person who did any job that was needed that day—passing out papers or other materials, helping with calendar (this was a kindergarten classroom), taking things to the office or to other teachers, etc.

If I needed more than one person to help, I just had the Lucky Duck from the previous day fill that position so that there were no arguments.  Once I had selected the Lucky Duck, I put the stick back in the jar with the duck side down, so I knew that student had been selected.  Once all the sticks were duck side down, I knew everyone had had a turn and I could flip them over and start again.  Something else I thought of on my third year making them, that I will save you right now from making the same mistake, is that I just put numbers on the sticks instead of names.  This way they are reusable from year to year.  Just match the number on the stick with your student’s number on your roster. Easy peasy.

Both ideas were simple, low prep and effective while making my teaching life easier and more streamlined.  I hope they are as helpful for you!

This website uses cookies to improve your experience while you navigate through the website. Out of these, the cookies that are categorized as necessary are stored on your browser as they are essential for the working of basic functionalities of the website. We also use third-party cookies that help us analyze and understand how you use this website. These cookies will be stored in your browser only with your consent. You also have the option to opt-out of these cookies. But opting out of some of these cookies may affect your browsing experience.
Necessary Always Enabled
Necessary cookies are absolutely essential for the website to function properly. This category only includes cookies that ensures basic functionalities and security features of the website. These cookies do not store any personal information.
Non-necessary
Any cookies that may not be particularly necessary for the website to function and is used specifically to collect user personal data via analytics, ads, other embedded contents are termed as non-necessary cookies. It is mandatory to procure user consent prior to running these cookies on your website.
SAVE & ACCEPT